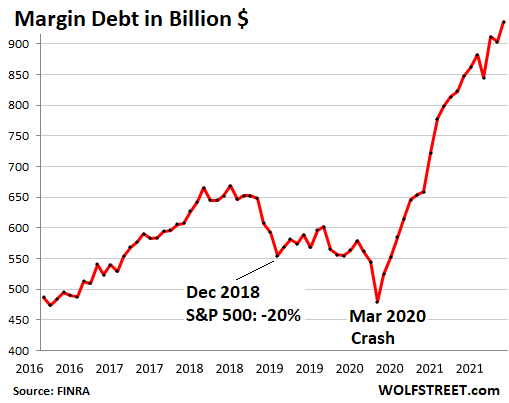 “Potentially Destabilizing Outcome could emerge if elevated risk appetite among retail investors retreats rapidly.” But what the heck.

Only part of the leverage in the stock market is tracked and disclosed on a monthly basis. Much of the leverage happens in the shadows, including Securities Based Lending (SBA) that banks may or may not disclose on a quarterly or annual basis; leverage at the institutional level such as with hedge funds, an $8.5 trillion industry; and leverage associated with options and other equities-based derivatives.

It’s only when something blows up that we can see tidbits of this leverage emerge in all its splendor, such as when Archegos imploded earlier this year.

The only leverage data we do get on a monthly basis is margin debt at brokers, reported by FINRA. And we got another doozie: Stock market margin debt spiked by $33 billion in October from September to another all-time high of $936 billion, up by $277 billion, or by 42%, from a year ago, and up by 67% from October 2019

The increase in margin debt has become a huge outlier, compared to prior years, with margin debt ballooning by 42% year-over-year and by 66% in two years, summarized by this chart of year-over-year changes, with the period since March 2020 in red:

This type of stock market leverage doesn’t predict when the market will crater. What it does predict is that when this market is going down hard enough, it will trigger massive bouts of forced selling as margin calls are going out, and leveraged investors have to sell stocks to pay down their margin debt, which then pushes down prices further, which then triggers more forced selling, and more fears of forced selling, as portfolios are being liquidated, thereby accelerating the swoon.

This is why leverage is a risk to financial stability. And why the Fed keeps talking about leverage in its Financial Stability Reports.

But apparently no one at the top of the Fed – least of all Powell and the other members of the FOMC – ever reads these Financial Stability Reports because the FOMC, out of the other side of its mouth keeps encouraging ever more leverage with its interest rate repression and money printing.

Margin debt is the big accelerator on the way up, as borrowed money enters the market and creates new buying pressure.

And margin debt is the big accelerator on the way down, as this borrowed money gets drawn out of the market and vanishes by paying off debts, thereby creating selling pressure.

In its Financial Stability Report, released this month, the Fed is particularly warning about high leverage among young stock market investors.

“The median leverage ratios of younger retail investors are more than double those of all investors, leaving these investors potentially more vulnerable to large swings in stock prices, as they have a larger debt service burden,” the Fed said in the report.

“Moreover, this vulnerability is amplified, as investors are now increasingly using options, which can often boost leverage and amplify losses,” it said.

High leverage is a sign of high and growing “risk appetite,” as the Fed calls it. And concerning the risk appetite of these investors, and their reliance on social media, the report warns:

This article is courtesy of ThePricklyPear.org, an online voice for citizen journalists to express the principles of limited government and personal liberty to the public, to policy makers, and to political activists. Please visit ThePricklyPear.org for more great content.